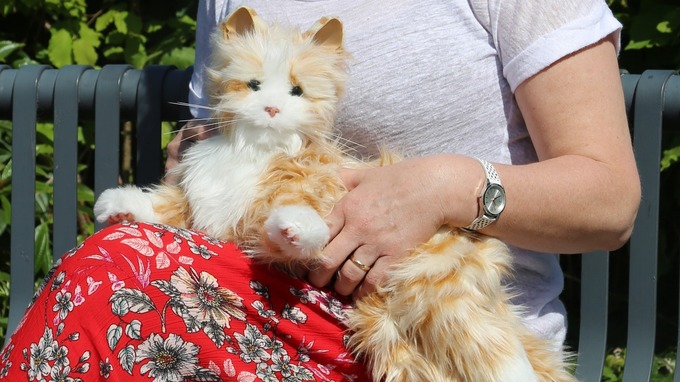 Robotic pets all set to become widespread in dementia care

Evidence suggests that robotic pets really do have the capacity to help people living with dementia. Robotic companions have recently been trialled at 2 separate universities in the UK and the results are very encouraging.

The robotic pets have been shown to reduce stress and anxiety, promote social interaction, facilitate emotional expression, and improve both mood and speech fluency.

Researchers at Wrexham Glendwr University have been trialling the use of ‘robocats’ with older people living with dementia in sheltered housing and their own homes. 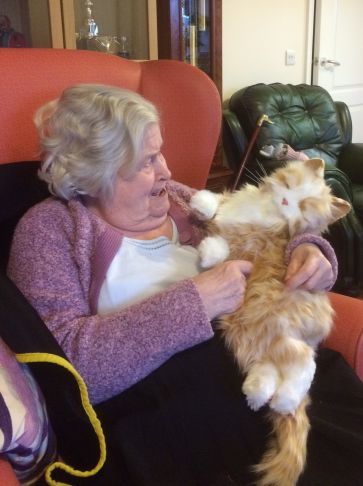 Designed to bring comfort and companionship, the cats have realistic fur and make pet-like sounds. They contain sensors that mean they respond to petting and hugs with familiar pet-like actions such as purring and rolling over.

Dr Joanne Pike, a senior lecturer in Nursing at the University says,  “We know that pets can have a big impact on therapy and a positive effect on the health and wellbeing of an individual. These robotic companion pets are not a substitute but they are great company, particularly for someone elderly or living with dementia.”

Dr Pike’s Mother, who was living with Alzheimer’s disease, had one of the cats to look after and it proved a source of comfort. “Towards her later days, even if she didn’t talk to us she would be talking to the cat and stroking it. Mum felt comfort in that, it made her come alive.”

Similarly encouraging results have been found by researchers at the University of Brighton, who have been testing a furry robotic seal pup, called PARO.

PARO, which was invented in Japan, has built-in sensors and artificial intelligence that allows the seals to “learn” and respond to the name given to them by patients. They can also react to being stroked and spoken to by wriggling, turning to the patient, opening their big eyes and squeaking.

Researchers found that the impact of the robotic seals was significant with many potential uses.

PARO was able to soothe some patients, helping to reduce agitation and aggression. The seals also promoted social interaction, encouraging patients to reminisce about pets they had in the past, and show love and affection.

“The most important aspect is the improvement PARO makes to a patient’s quality of life” explains lead researcher Dr Penny Dobbs.

Introducing the robotic pets to a 10 bed dementia ward run by Sussex Partnership NHS Foundation Trust, the researchers carried out extensive hygiene and cleaning tests amid concerns the furry devices could be hard to keep clean.

“To our knowledge, this was the first testing of the infection prevention and control aspects in the world and we are delighted with the results.” explains Dr Dobbs.

“We have demonstrated that, under controlled conditions, PARO was safe within the hospital setting for an acute care dementia unit. It is hoped that this can allay concerns from those who have been hesitant about using PARO in the NHS.”

“It is anticipated that PARO will receive Medical Devices Status in the UK shortly and the Distributor is preparing PARO for the UK market – we could be seeing PARO on wards throughout the country in the not-too-distant future.”