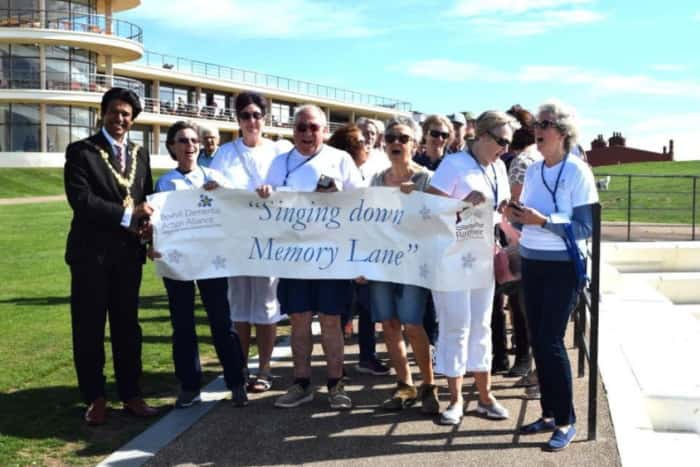 More than 50 people took a stroll down memory lane on Bexhill seafront on Sunday. They were taking part in the third annual Memory Walk, organised by Bexhill Dementia Action Alliance (BDAA).

Sally Hemmings, from BDAA said: “This event was organised in order to raise awareness of dementia , share what we do locally for people with dementia and their carers, and to raise funds for BDAA and the Alzheimer’s Society."

“Over 50 people walked with us, including Bexhill’s Mayor, Cllr Azad, and members of the Singing Down Memory Lane group. It was a huge success with £500 raised and lots of information given out to members of the public affected by dementia.

“The De La Warr Pavilion kindly provided support with the event and provided much appreciated refreshments at the end of the walk."

Singing Down Memory Lane is a group for people with dementia and their carers which meets fortnightly at the Bagnall Room, Sackville Road for two hours of singing and enjoyment. “They are holding their 3rd Birthday party on September 25 at 10:30am. There will be the usual singing with extra cake."

"Also coming up for BDAA is our Dementia Friendly Film Screening of High Society on the September 27 at the Bagnall Room, Sackville Road Bexhill at 1:30pm."

It is estimated that as many as 10,000 people could be affected by dementia in East Sussex alone - so it is a very pressing issue for our community.

Follow Bexhill Dementia Action Alliance on Facebook or for further information email them at bexhilldaa@gmail.com or ring 07902109951.