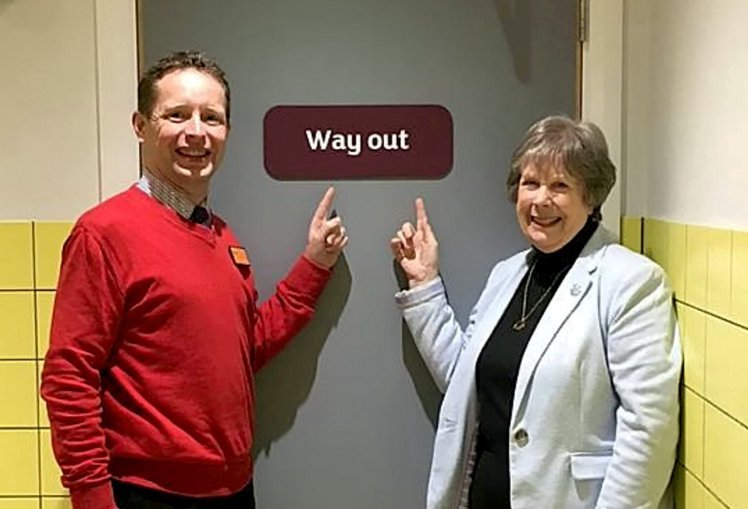 Sainsbury's have pledged to make toilets in all their stores more dementia friendly by introducing colourful, easy to spot, 'Way out' signs on the doors.

This simple initiative will help customers with dementia find their way about more easily and help prevent them becoming disorientated and confused in the unfamiliar surroundings.

The idea came from campaigner Angela Clayton-Turner who frequently had to enter the men's toilet when her husband Ted, who was living with Alzheimer's, found it impossible to find his way out.

"I have been talking about the difficulty my husband had finding his way out of public toilets, for some years" explains Angela.

'When caring for Ted, I had to enter the men's loos more than I care to remember. Although he was able to use public toilets, he was unable to find his way out."

'It affected my dignity going into male toilets. You go in with your hands over your eyes as you aren't quite sure what you are going to find in there."

Determined to improve the situation she co-wrote an article for the medical journal, The Lancet, to highlight the problems those living with dementia face when using public conveniences.

The inaccessibility of public toilets can all too easily lead to isolation as people avoid travelling and going out for fear of not being able to use a loo when they need one.

Angela is therefore delighted that Sainsbury's have listened and decided to do something to help.

"I am absolutely over the moon that Sainsbury's have taken this problem on board. Hopefully where Sainsbury's leads other organisations will follow!"

Improved signage may seem a simple idea, but it can really make a difference to those coping with dementia.

Emma Bould, Programme Partnerships Project Manager at the Alzheimer’s Society said, “We are delighted to see toilets with dementia friendly signage being installed nationally at all Sainsbury’s stores by March 2018."

"Finding and exiting toilets can often be confusing for people living with dementia, causing anxiety when they are out and about. This small but significant step will enable people with dementia to quickly find the exit, while also making the route clearer to all customers."