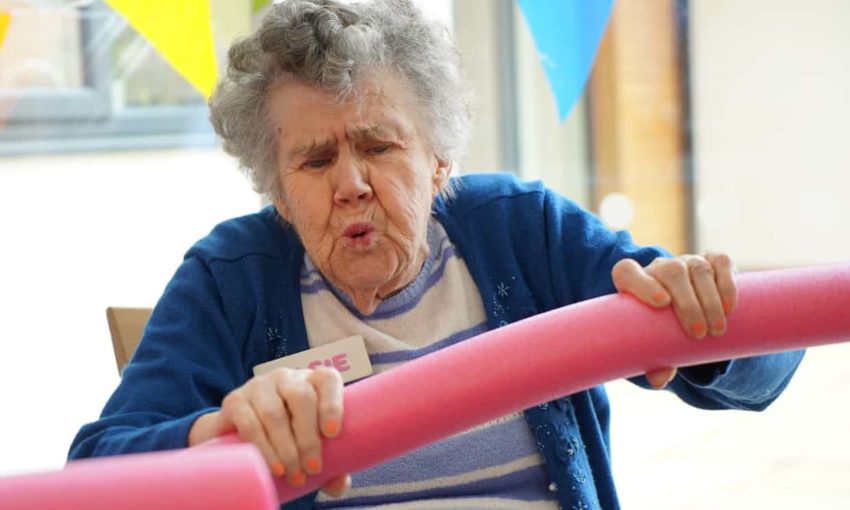 Care Home residents can get active and have fun!

Sport England are investing £1 million in a bid to help older people get active and combat growing levels of isolation. By adapting sports such as volleyball, orienteering, boccia (a form of wheelchair bowls) and even weightlifting for older participants, the idea is to encourage care home residents to take up active exercise and have fun at the same time.

Writing for The Guardian, Emma Sheppard finds out more about the scheme...

Two teams of residents at Anson Court care home eyeball each other across the improvised volleyball net – a string of bunting tied between a chair and an indoor plant. The soft ball is thrown high and hands reach up to send it back over the flags. One man uses his head, a shoe goes flying through the air. By the end of the session, everybody is laughing.

“I don’t normally do this. I’m a bit hindered because of my eyes,” Betty, who struggles with fading vision, admits afterwards. “But of course I’ll come back next time. If you make a mistake, you can all laugh at it. I enjoy the comradeship and the giggles.”

The games are part of a new initiative by Oomph! Wellness to encourage older adults to get active and combat growing levels of isolation. After securing a £1m grant from Sport England, the social enterprise has worked with national professional bodies for volleyball, weightlifting, orienteering and boccia – similar to wheelchair bowls – to adapt activities for older people, and provide weekly sessions with care homes, day centres, housing associations and other community care providers. The aim is to reach 27,000 people by 2020.

The group at Anson Court in Hertfordshire is being led by Oomph instructor Robin Osborn. He starts by getting everyone to squeeze the volleyballs between their hands and then proceeds to umpire three-minute games of football, volleyball, tennis and hockey – all played with foam swimming “noodles” and balls, while sitting down. The aim is to get everyone involved.

“You have to adapt the exercises because you want everyone to be included, but it’s also about [building up their] confidence,” says Osborn. “One of the ladies was struggling with the movement, but by the end she’d got it.”

According to NHS England, older adults at risk of falls should do exercises to improve balance and coordination at least twice a week. Regular physical activity has been found to prevent and manage more than 20 chronic conditions, including dementia (30% reduction), type 2 diabetes (40%), depression (30%) and hip fractures (68%). Previous studies have found that women over the age of 80 who exercise are less likely to fall.

Despite this, government figures show that 63.5% of adults over the age of 85 reported being physically inactive – classed as doing less than 30 minutes of physical activity a week – in 2015-16. By the age of 75, only one in 10 men and one in 20 women in the UK are active enough for good health.

The physical benefits – even after just an hour’s session – can be clear to see. Osborn has run community sport sessions for 12 years and says participants often show improvements in flexibility and the speed in which they can rise from a chair. But such group activities also help to combat loneliness. Age UK has found that nearly half of all people aged 75 and over live alone, and a million older people say they always or often feel lonely.

“That’s the benefit a lot of people miss – someone’s not in their flat, they’re out with a group,” Osborne adds. “They might be a bit shy or a bit reluctant initially, but as they warm up they come out of their shell … there’s always a hidden bit of competitiveness.”

Oomph! has worked in care settings since 2011, after founder and qualified personal trainer, Ben Allen approached a care home in Scarborough to ask if he could run an exercise class for residents. The model has evolved in the past seven years to train care home staff to run the classes themselves, which keeps the costs down for providers and participants, who are typically charged £1 to attend a session. In 2016-17, more than 1,500 people had been trained and almost 60,000 classes were delivered – a 56% increase on the year before. The majority (84%) of older adults who took part saw a significant impact on their mental stimulation, 68% saw increased physical mobility, and 85% saw increased social interaction.

Training staff to run the new programme costs £300 a venue for up to three staff. About 150 instructors have already been trained in the three months the pilot has been running – 48 are from Quantum Care, which runs Anson Court and plans to offer sessions across 16 venues. 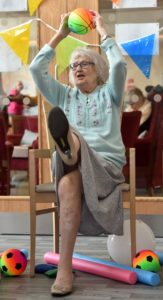 Older adults who took part saw a significant impact on their mental stimulation, physical mobility and levels of social interaction.

John Cunningham, interim operations director, says running the sessions internally also benefits staff, who receive a formal qualification after completing the training. “Our view is that it’s better to support our own staff with their development, and we’re benefiting from people who know our residents. Some of our more reserved people probably wouldn’t engage as much with a stranger coming in to deliver those classes.”

A 2004 study by the University of Dundee found that the most powerful deterrent to engaging in exercise among the over 65s is a lack of interest and disbelief that exercise can enhance or lengthen life. But in a 2015 analysis of 5,700 older men in Norway, those doing three hours of exercise a week lived five years longer than those who didn’t, putting physical activity on a par with stopping smoking in terms of health benefits.

Whether weightlifting and volleyball will become part of every older care setting remains to be seen, but Richard Hazenberg, professor of social innovation at the University of Northampton, says it’s an example of early prevention strategies, which are often the most cost effective way of ensuring better health in later life.

“Our hypothesis is that we’re going to see improvements in gait, walking speeds, improvements in fall efficacy,” says Hazenberg, part of the team analysing the benefits of the Oomph pilot over the next 18 months. “If we can get engagement up through a varied programme in multiple settings, I think we’ll see significant [health] improvements.”